From For The King Wiki
Jump to: navigation, search 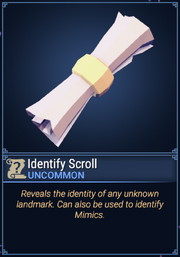 Identify Scrolls can be used to identify the nature of Chests in dungeons.

Dungeons are a Location type which present a series of challenges for the player.

In order for a party to enter the dungeon, all of the players must be in the same region, no matter how far from the location.

Upon entering the dungeon, the players will be presented with one of a few scenarios, these being:

Between each scenario, the players are given the opportunity to manage their inventory and use items. Items that may be used are limited to those that can be used within a fight. Once each player has pressed the 'Ready' button, the next scenario will begin. A character with the Party Heal skill may use this ability freely during the 'Ready' stage.

Occasionally within dungeons you come across trap rooms. These are Stat based challenges which must be overcome in order to progress.

Each trap has three options:

Using a Thief's Delight will instantly dismantle the trap at the cost of the item.