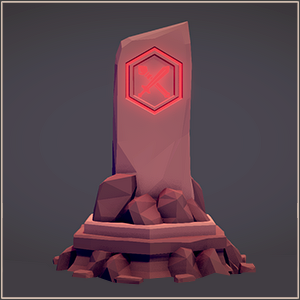 Sanctums and Devotion are two of the Concepts in For The King.

Each Sanctum belongs to one of the ancient gods, and they are found throughout the land of Fahrul.

Devoting to a Sanctum will bestow benefits onto that character, which varies from Sanctum to Sanctum, as well as restoring them to their maximum HP. Each Character may only belong to one Sanctum, and no two characters may share a single Sanctum. Keep this in mind when deciding which Sanctum you want your characters to be Devoted to.

If a character devoted to a Sanctum falls in battle, the Sanctum will crumble and the character will instantly be revived with a small amount of HP, a small amount of Focus, and no loss of lives from the Life Pool. However, this will cause the Sanctum to crumble, preventing anyone else from Devoting to it, and the character will lose any benefits associated with that Sanctum. Other than The Foul Priestess (see below), this is only way to remove a character's Devotion to a Sanctum.

After Devoting a character to a specific Sanctum 8 times, it may be upgraded to a Greater Sanctum by spending 15 Lore at The Lore Store. This will affect any Sanctum of that type in future games.

In-game description: "An ancient obelisk pulses with warm energy. You feel at peace."

Note: There are more Sanctums (8) than there are biomes in a normal FTK game (6). Therefore 6 Sanctums will be chosen at random to appear in game and two will not appear.

The Foul Priestess will cause sanctums to crumble while her scourge is active. Travelling to her temple and defeating her will prevent her from destroying any more sanctums.